Juicing cannabis leaves is a relatively new phenomena, popularized only since 2009, most particularly with the passionate promotion of such by Dr. William Courtney. Dr. Courtney is a California physician who has treated his wife Kristen's systemic lupus and other auto-immune conditions with juiced cannabis.

Dr. Courtneyclaims that juicing is the best way to consume medical cannabis and claims patients should “expand their use of cannabis from the 10-milligram psychoactive THC dose to the 600-to-1000 milligram dietary THCA dose. Raw bud has a higher concentration of cannabinoids than leaves and is an excellent method of consumption if you have the resources to make this possible. Both are extremely beneficial but they are best combined. Bud should be at the state where the trichomes are fully present but not yet amber (i.e., cloudy). Leaves for eating or juicing should be picked from plants well into flowering stage.”

Green Buddha has found the cannabis juicing claims to be somewhat misleading and unsubstantiated. Green Buddha began testing cannabis leaves for THCA and CBDA content at various stages of plant development. So we tested leaves from both indica and sativa plants as well as some high CBD plants. We also tested immature leaves, leaves from plants a month old, and those just starting to flower. We also tested the leaves of plants with full buds.

None of the leaves tested, on any of the strains, regular nor high CBD, had any meaningful levels of THCA nor CBDA. If there was a positive health effect from juicing cannabis leaves, this effect could not be traced to THCA nor CBDA.

Furthermore, the ProjectCBD also did an examination of Dr. Courtney's claims and concluded that whatever benefits were derived from cannabis juicing - were not due to THCA/CBDA. This information has not stopped the coterie of Courtney believers from continuing to spread the gospel of juicing.

Certainly there are minimal side effects from juicing cannabis - outside of perhaps negatively affecting one's pocketbook. Be aware that the chlorophyll produced in the process can cause diarrhea.

Additionally, if you decide to juice cannabis leaves and are not growing - be very careful. If the grower has applied any pesticide, fungicide, or nutrient - the leaves would still contain those chemicals. Rinsing the leaves will not rid them of pesticides. SO you would not want to juice the leaves of any plant that has received these compounds during the growing process.

How About Juicing Cannabis Flowers?

Lorem Ipsum has been the industry's standard dummy text ever since the 1500s, when an unknown printer took a galley of type. 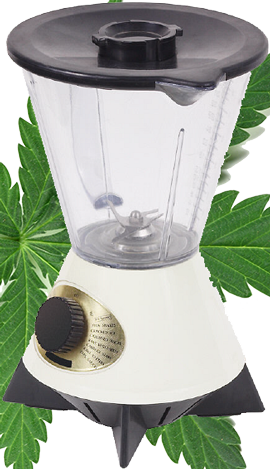 Decide for YourselfThe cannabis juicing phenomena demands our best cannabis critical thinking skills. Read the pro and con arguments, and the testing data and see what you think!

The Claimorem Ipsum is simply dummy text of the printing and typesetting industry. Lorem Ipsum has been the industry's standard dummy text ever since the 1500s, when an unknown printer took a galley of type.