Cannabis concentrates have been around almost as long as humans have explored cannabis. Hash products have been found in archeological digs dating back a couple of thousand years.

As anthropologists have mused, we Westerners are not known for chewing coca leaves nor smoking much opium. We like our products - refined, made more potent and easier to store and transport. Instead of coca leaves we're predisposed to cocaine and crack. Instead of opium, we're fond of heroin and morphine. The suspicion has been that once cannabis is lifted out of the illegal stance that we begin to refine and concentrate the cannabis high, and the concentrates industry will explode. We tend to agree.

In the last twenty years, cannabis concentrates has exploded - literally and figuratively - on to the scene. Today hash and cannabis concentrates are made in any number of ways including with the use of solvents such as butane. This has resulted in cannabis hash oil explosions. Today in Washington State it is illegal to make butane hash oil without an I502 license, in order to minimize such explosions.

Sincere patients would avoid butane hash oils in which still remain carcinogenic solvents such as acetone.

So what are hash, hash oils or honey oils, kief, budder, shatter and wax? And what is dabbing?

Hash and kief is mostly packed trichomes and retains all the terpenes and flavonoids.

Hash oil is a solution of various compounds found in the cannabis plant and many things can affect how its extract will turn out. As long as all the components of an extract are still in a single, homogeneous phase, the extract will be transparent. The different components will dictate whether the extract is hard, moldable or sappy. Hash oil is the least refined and thus retains all the terpenes. Thus hash oil remains fully effective medicine with similar canabinoid and terpene ratios as found in the raw material that was used in its making. Hash oils can be excellent medicine particularly if made solvent free.

Budder retains more, but not all, of the terpenes so it tends to be more flavorful but less potent – with THC percentages in the 70s. It has a creamy consistency from being whipped.

Wax - very similar to budder - where the cannabinoids crystallize around each other and separate from the terpenes and waxes. Like budder many but not all the terpenes are removed. This mixture of phases does not allow light to pass through and can have anything from a dry crumbly texture to a peanut butter consistency.

In shatter, the cannabinoids (in their natural acid forms), terpenes and waxes are all mixed together in one phase and in a way that allows light to pass through the molecular structure, just like hard candy. Shatter is smooth, clear and solid. It is the purest and most potent form because it involves a second extraction process that removes fats, lipids and waxes. This can result in over 80 percent THC. However, it also means that terpenes are lost in the process. Thus while shatter can be a hard recreational hit of nearly pure thc it is devoid of the 'entourage' effect which make otherwise cannabis excellent medicine.

Aim solventless (link to acetone test). SO NO butane hash oil or BHO. Ultra-fine water hash is now being pitched as “solventless” wax, reflecting the level of distrust about poorly made butane-tainted products (thank you Ed Rosenthal).

Because terpenes act as solvents, the higher the percentage of terpenes present, the more liquid-like the end product will turn out.

Concentrates - good or bad are here to stay.

Patients often find there's a balance between needing higher potency products for break through pain moments or unmitigated sleeplessness. But the more frequent use of concentrates appears to negatively affect dependency issues. Concentrates can also become expensive to use - particularly if habituation has occured.

A Word about the Dangers of Dabbing

"Dabbing" is a simple concept: a small amount of super-high concentrate (budder, shatter, hash oil)- maybe 80% or more - is put on a heated surface. A puff of smoke is emitted, and then the user inhales the entire puff of super-concentrated smoke. The effects are immediate -- and they're intense. Folks who have used cannabis daily for 30 years report, "I am high again!" Other people not so used to the magic plant usually need to sit down for a minute or two before they can talk again....

Read More on the Dangers of Dabbing

1. Place 4 oz brittle dry grass in a 5-gal bucket.
2. Add 3 lb of dry ice—it should be ice cube size or smaller. Let the mixture cool for 2 minutes.
3. Place a 220-mesh screen bag over the bucket top.
4. Turn the bucket upside down and start shaking it vigorously, moving down a 6- or 8-foot table or countertop in about 2 minutes.
5. The powder changes color from a golden to a greenish tint over the table length—golden is the purest, highest quality. The powder was separated into higher and lower quality portions.
6. The two piles—they are ready to be smoked, pressed, or used in recipes.
7. A pile of fine, blonde, dry ice hash beckons all to take a toke.

Yep you read this correctly, how crazy is this? How to make hash from a hair straightener! this method has come to be called the Rosin technique. All you need is some bud, some parchment paper (not wax paper) and a hair straightener. Totally toxic free!

Buy your self some bubbahash bags and let's get rolling!

Another excellent reason to grow your own medicine is having the raw product to explore hash making. Solventless hash can now be almost as highly concentrated in thc as solvent hash, but has none of health and safety concerns. Bubblehash is seaparating out the trichomes which are then dried and packed into hash. The best range for the finest quality hash is between 70 and 160 microns with the smaller product being best for dabbing and the larger product being better for edibles.

Ed Rosenthal's new book Beyond Buds is really worthy. Read a chapter here on "Advanced Hash"
and then buy the book. 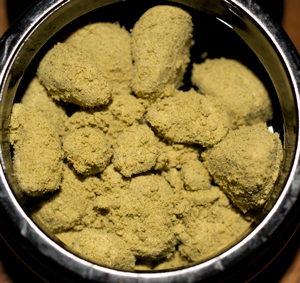 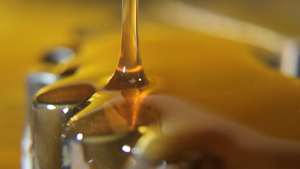 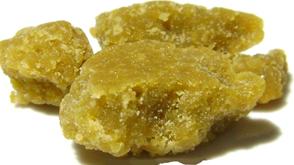 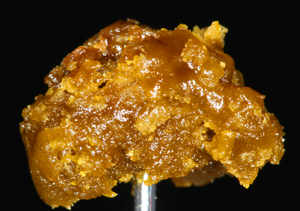 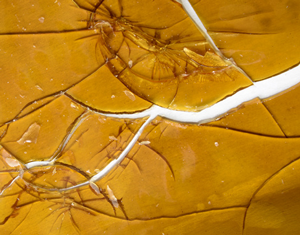 Warnings to consider with Concentrates

HBC is a solvent-free wax made, as the name describes, in a hyperbaric chamber. Similar to other wax-making processes HBC uses cool temperatures to remove cannabinoids. Hyperbarometric pressure with a reverse nitrogen boil work to pull the cannabinoids and terpenes off of plant matter. Once liquid, the concentrate is
filtered through several filters sorting trichomes by density, and then is turned to wax by reversing pressure several atmospheres. This process retains both lower and higher level terpenes and produces a product that is fragrant as well as potent.