CBDor Cannabidiol is just one of more than sixty different cannabinoids in the cannabis plant that Scientists have identified. Currently it gets a lot of attention in the media and this is deserved. Nonetheless there is a great deal of confusion about what CBD is and can do.

America with its puritanical history has a predisposition against psychoactivity in its medcations. But psychoactivity is not inherently an adverse side effect. THC is not merely a recreational compound. CBD and THC have synergy and are best used together, increasing the efficicacy of both compounds. CBD is not legal in all 50 states and it does matter where you get it.

CANNABIDIOL (CBD), a non-psychoactive component of the marijuana plant, has generated significant interest among scientists and physicians in recent years – but how it exerts its therapeutic impact on a molecular level is still being sorted out.

Unlike psychoactive THC, CBD has little binding affinity to either the CB1 or CB2 cannabinoid receptors. Instead, CBD indirectly stimulates endogenous cannabinoid signaling by suppressing the enzyme fatty acid amide hydroxylase (“FAAH”) – the enzyme that breaks down anandamide.
Whereas the cannabinoid molecules found in cannabis are considered “exogenous ligands” to the
cannabinoid (CB) receptor family, anandamide is an “endogenous” cannabinoid ligand – meaning it binds to one or more cannabinoid receptors and is found naturally inside the body. Anandamide favors the CB1 receptor, which in mammals is concentrated in the brain and central nervous system. Because FAAH is responsible for breaking down anandamide, less FAAH means more anandamide remains present in the body for a longer duration. More anandamide means greater CB1 activation.
By inhibiting the enzyme that metabolizes and destroys anandamide, CBD enhances the body’s innate protective endocannabinoid response. At the same time, CBD powerfully opposes the action of THC at the CB1 receptor, thereby muting the psychoactive effects of THC. CBD also stimulates the release of 2-AG, another endocannabinoid that activates both CB1 and CB2 receptors – CB2 receptors are predominant in the peripheral nervous system and the immune system.

The one most people know about and focus on is THC (), a cannabinoid found concentrated in cannabis that elicits the mildly psychoactive mind and body 'high' that is traditionally associated with smoking the plant. While THC is effective for pain relief in many patients, the ‘high’ feeling may be, at times, an unwanted or overwhelming side-effect. Recent studies have shown that concentrations of CBD (Cannabidiol), another cannabinoid, give a feeling of calm and well being in addition to providing excellent pain relief and muscle relaxation. CBD rich cannabis reduces anxiety and thus makes it the cannabinoid of choice for those with mental health issues such as social anxiety and PTSD. Furthermore, strains high in CBD and low in THC are a handy tool for medical patients because they do not leave the patient feeling disoriented or otherwise unable to perform daily functions, as a THC filled flower might. CBD has even been shown to counteract some of the sedative effects commonly associated with a THC ‘high’.

Whereas CBD does not bind to either of the two known cannabinoid receptors with particular affinity, it has been shown to directly interact with other, so-called “G-protein-coupled” receptors to confer its medicinal effect. CBD, for example, binds to the TRPV-1 receptor, which is known to mediate pain perception, inflammation and body temperature. TRPV is the technical abbreviation for “transient receptor potential cation channel subfamily V.” Scientists also refer to it as the “vanilloid receptor,” named after the flavorful vanilla bean. Capsaicin — the pungent compound in hot chili peppers — is a well known activator of the TRVP-1 receptor. Vanilla contains eugenol, an essential oil that has antiseptic and analgesic properties, that also helps to unclog blood vessels. Historically, the vanilla bean has been used as a folk cure for headaches. CBD is a TRPV-1 “agonist” or stimulant. This is likely one of the reasons why CBD-rich Cannabis may be a particularly effective treatment for neuropathic pain.

Jose Alexandre Crippa and his colleagues at the University of San Paulo in Brazil and at the King’s College in London have conducted pioneering research into CBD and the neural correlates of anxiety. At high concentrations, CBD directly activates the 5-HT1A (hydroxytryptamine) serotonin receptor, thereby conferring an anti-depressant effect. This receptor is implicated in a range of biological and neurological processes, including, but not necessarily limited to, anxiety, addiction, appetite, sleep, pain perception, nausea and vomiting. 5-HT1A is a member of the family of 5-HT receptors, which are activated by the neurotransmitter serotonin. Found in both the central and peripheral nervous systems, 5-HT receptors trigger various intracellular cascades of chemical messages to produce either an excitatory or inhibitory response, depending on the chemical context of the message. CBD triggers an inhibitory response that slows down 5-HT1A signaling. In comparison, LSD, mescaline, magic mushrooms, and several other hallucinogenic drugs activate a different type of 5-HT receptor that produces an excitatory response.

Whereas cannabidiol activates the TRPV-1 vanilloid receptor and 5-HT1A serotonin receptor, some studies indicate that CBD may also function as an antagonist that blocks, or deactivates, another G protein-coupled receptor known as GPR55. GPR55 has been dubbed an “orphan receptor” because scientists are still not sure if it belongs to a larger family of receptors. Some researchers postulate that GPR55 may actually be a third cannabinoid receptor type. GPR55 is widely expressed in the brain, especially in the cerebellum. It is involved in modulating blood pressure and bone density. GPR55 promotes osteoclast cell function, which facilitates bone reabsorption. Overactive GPR55 receptor signaling is associated with osteoporosis.

GPR55, when activated, also promotes cancer cell proliferation, according to 2010 study by researchers at the Chinese Academy of Sciences in Shanghai. This receptor is expressed in various types of cancer. CBD is a GPR55 antagonist, as University of Aberdeen scientist Ruth Ross disclosed at the 2010 conference of the International Cannabinoid Research Society in Lund, Sweden.
By blocking GPR55 signaling, CBD might act to decrease both bone reabsorption and cancer cell
proliferation. This is one of many molecular pathways through which CBD exerts an anti-cancer effect.

Dr. Sean McAllister’s research at the Pacific Medical Center in San Francisco indicates that CBD reduces breast cancer cell proliferation, invasion and metastasis by inhibiting Id-1 gene expression. Best results were obtained when CBD was administered in combination with THC. Several other studies underscore the therapeutic advantages for combining CBD and THC. CBD has been shown to be a potent anti-oxidant that mitigates the negative effects of oxygen free radicals. These highly
reactive free radical chemicals are produced when animals use oxygen to burn food for fuel.

A great deal of data suggests that many problems associated with aging stem from the inability of an
organism to protect itself against free-radical-induced inflammation and oxidative stress. This provides a fertile ground for the development of neurodegenerative and other age-related illnesses.

Cardiovascular, autoimmune, neurological disorders, cancers, and the aging process itself are all thought to have free radicals as a causative agent. Further, they are implicated in the formation of protein amyloid plaques — plaques that can attack neural synapses and prevent normal chemical and electrical signaling. By binding up these free radicals, antioxidants can minimize the plaque formation cycle associated with the progression of Alzheimer’s disease. Accordingly, several studies have shown that CBD blocks Alzheimer’s plaque formation by a cannabinoid-receptor-independent mechanism. 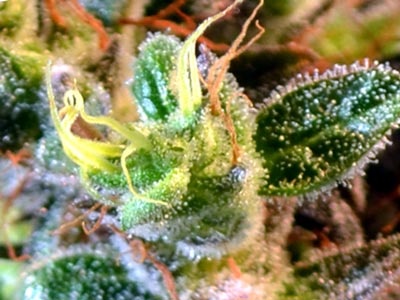 One of the common misunderstandings about CBD concerns its effectiveness. CBD works best with THC, as there is a synergist effect. CBD alone is not nearly as effective medicine. Read the Tale of Two Cannabinoids by Dr. Ethan Russo for an indepth discussion of this synergy.

A Warning About CBD (Internet) Sales 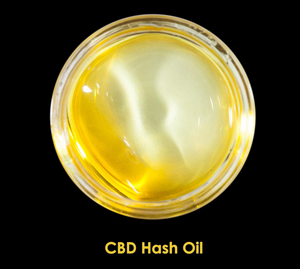 Potentially a wonderful product as long as it has been produced pesticides and other contaminants free. Learn more on concentrates.

The Green Buddha's in house high CBD strain was M’Otto #2 which was tested at 11% CBD and almost devoid in THC making it an excellent choice for those interested in non-stony pain management. One can also mix a higher THC strain with M’Otto #2 to get the synergistic effect of both cannabinoids and a greater sense of pain relief.

We also are now working with "Jeanne" which is an amazing 16% CBD. You can email us if you want a clone and are in the Seattle area.

Most modern recreational cannabis strains are devoid of CBD. Why?

Absolutely! CBD too needs to be activated from CBDA. Get the most out of your medicine by decarboxylating it.