How to make cannabis caps 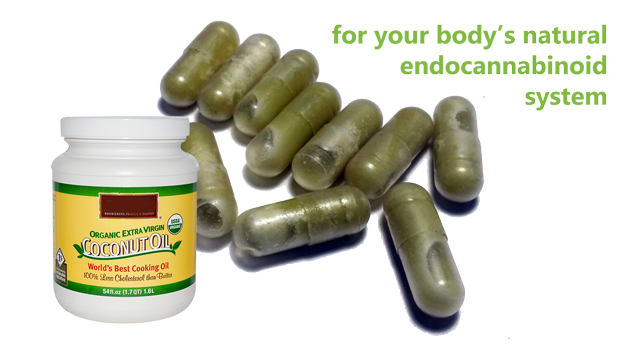 Mari pills as cannabis coconut oil caps are sometimes called - is another extremely useful medical cannabis product. They can be useful both for generally raising the level of cannabinoids in one’s system, as well as, being more specifically useful for those struggling with autoimmune diseases.

Your body produces some of the same compounds found in cannabis; these are called endo (for endogenous) cannabinoids and encompass the natural endocannabinoid system (ECS).
We produced endocannabinoids in at least two general locations, in the CB1 receptors in your brain - which is why one gets high from cannabis. There are also found more numerous CB2 receptors in the lower intestine, gut, uterus - in fact CB2 receptors are found in every major organ in our body. What doctors have now discovered is your natural endocannabinoids in the gut assists in the regulation of the immune system and gut motility (pooping). What we have found is maripills – which are extra virgin coconut oil with cannabis extract in a gel cap – can be extremely useful for those with autoimmune diseases and gut motility issues. Do not use a veggie cap, which will completely dissolve in one's stomach making the mari pill merely an edible. That gel capped coconut oil cannabis caps are useful for those with autoimmune diseases should come as no surprise as

Thus, when we direct cannabinoids to those CB2 receptor sites in one's lower intestine we are no longer treating the symptoms of these diseases, we are systemically treating the disease.

How to make cannabis caps?Making your own cannabis caps allows one to make them in the exact dose desired. Let this recipe serve as a guide. First you must decarboxylate your cannabis. After decarboxylation, weigh and grind out 7g of prime cannabis flower.

Measure out 30ml of coconut oil, which should be enough coconut oil to just cover the cannabis. Coconut oil is solid at less than 76°F, but a tablespoon is still a tablespoon. Now put the oil and ground cannabis into either your mini Crock-Pot set on warm (it’s lower than low).

The idea is to safely heat the mixture to between 180°F and 220°F so that the cannabinoids will chemically bind to the oil. The longer you heat the mixture, the better, which is why a Crock-Pot is ideal for this. Anywhere from 1/2 to 6 hours is recommended by a variety of people; at Green Buddha we happened to use 3 hours, but we’ve regularly made many successful batches in only 90 minutes. Stir every 15 to 20 minutes.

Let the mixture cool to about 100°F, and then you can filter out the plant material (using a coffee filter and a garlic press or potato ricer to squeeze out every last drop).

Now you fill the “large end” of the #0 capsules by using an oral syringe. We’ll assume you have access to something like a Cap-M-Quik filler to hold the capsule halves up. Don’t try to fill the capsules all the way or too fast; let the oil settle so any bubbles go out while you work on the next capsule, then when you’ve gotten them all, go back if necessary. We ended up with about 44 capsules, so it all worked pretty well. Be sure to push hard enough to feel the “click” when putting the small end of the capsule on, so you know it’s sealed properly.

Dry your hands and gently wipe off the capsules as you take them out and put them away (ideally into a standard pill bottle in the refrigerator, where the oil is less likely to go bad even after months). Oh, and rinse everything you used off with hot water immediately before the oil re-solidifies.

For those who are interested in numbers, I started with the 7 grams of ground leaves and ended up with 30 ml. of infused oil, which yielded 44 capsules (#0 size).
More Cannabis Cap instructional videos on the Green Buddha Youtube Channel

When you smoke or vaporize cannabis, the THCA molecule loses its carboxylic group (COOH) in the form of water vapor and carbon dioxide and becomes THC. Long story short, THCA becomes THC and your cannabis becomes psychoactive. This process is called decarboxylation or decarbing. To get the most efficient use out of your cannabis decarboxylate it before using.

How to make THC Pills 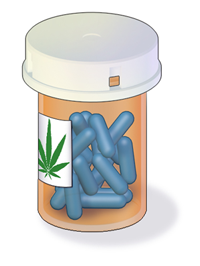 Decayboxylated kief also can be used and it dissolves easily when mixed in warm coconut oil. Kief is more concentrated than bud so a kief packed pill will be more potent. Try size #0 capsules when using kief because the dosing size is smaller.